So my sister and I have a thing for fast planes, guns, and boys in uniform. These are all mild forms of amusement, nothing seriously obsessive, except maybe for the guns. I realise all this sounds slightly geeky and has nothing at all to do with the meaning of life, the darker side of alternative subcultures, changing the world, or writing a good book, but I’m going to share it all with you anyway. 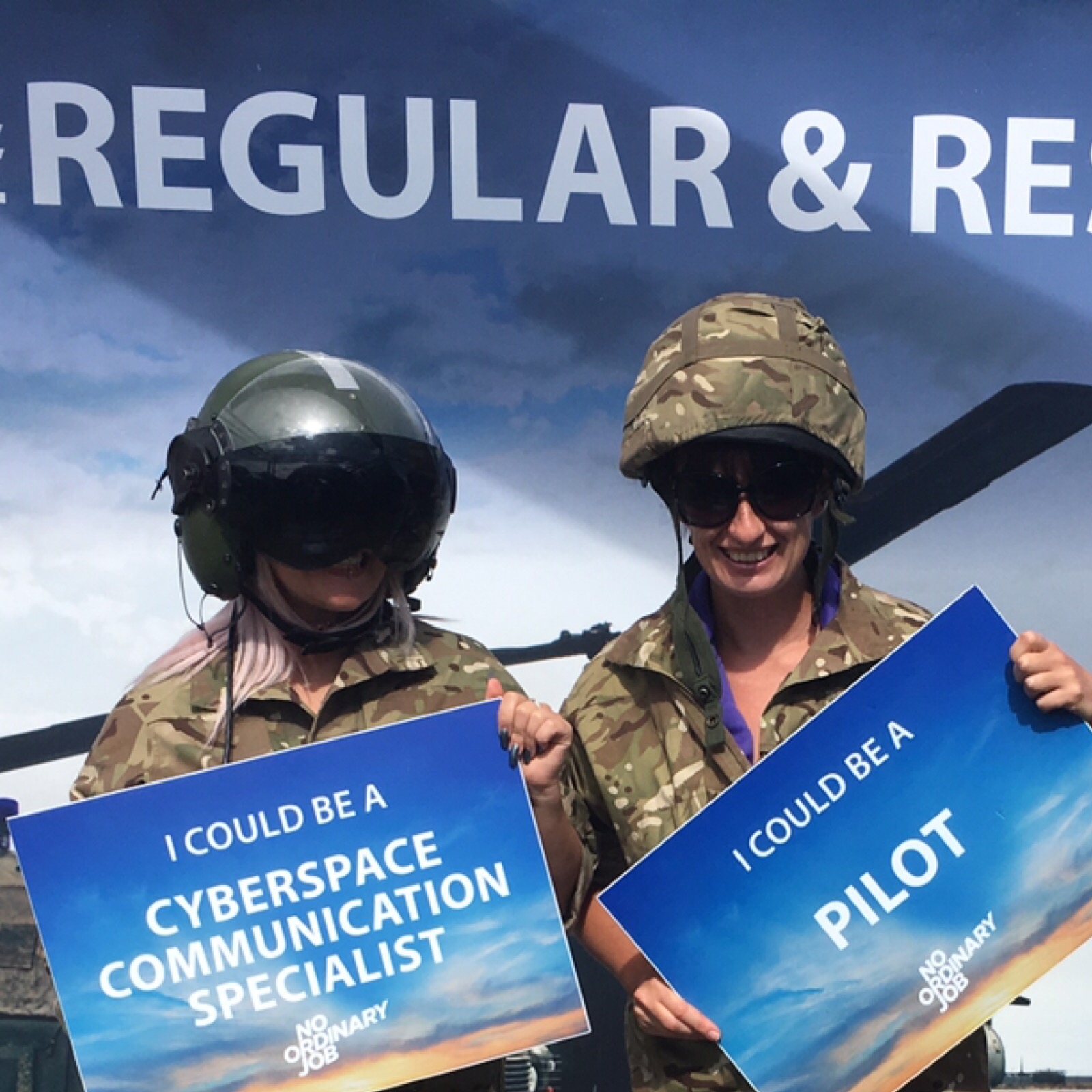 Because we had an aircraft-hanger full of fun this weekend at the Airbourne International Airshow. As one of my friends said on the day [and I paraphrase] there is something weirdly sexy about watching a plane fly upside down. Insert laughing/crying emoji here, but it is true. Especially when they make a lot of noise doing it, which makes the RAF Typhoon and the Belgian F-16 my easy favs for spectacle + noise.

The Royal Air Force Aerobatic Team, or the Red Arrows, opened the show on both days I was there, and let’s face it, they are a show all by themselves. You cannot not love them. To see 9 BAE Hawk T1A jets flying in what seems like stupidly close unison, is something pretty exhilarating. My sister loves their final move, called Infinity, where they pretty much do a giant loop through the air while one loops the symbol for infinity around them in red smoke. It’s badass cool. We learned from one of the lads there all about how they have to wear anti-G trousers which appear to work like giant blood pressure bands to regulate how your blood flows through your body, therefore preventing you from passing out when they “pull-G” during their routines. Considering I despise those blood pressure bands, I can’t even imagine what wearing one on your entire lower half would feel like (ugh). However, it’s a considerably less horrible option than passing out at the joystick of a fighter jet, mid loop.

As mentioned earlier, we also got to meet lots of boys in uniform and play with some pretty big guns (get your mind out of the gutter). My sister is an expert in firepower and knew what all the guns were, and even knew that the first one I got to hold had been modified with a rocket launcher attachment — she plays way too much Battlefield! All I knew was that it bloody well weighed about 12kg, and holding it steady long enough to see anything through the scope was farcical. 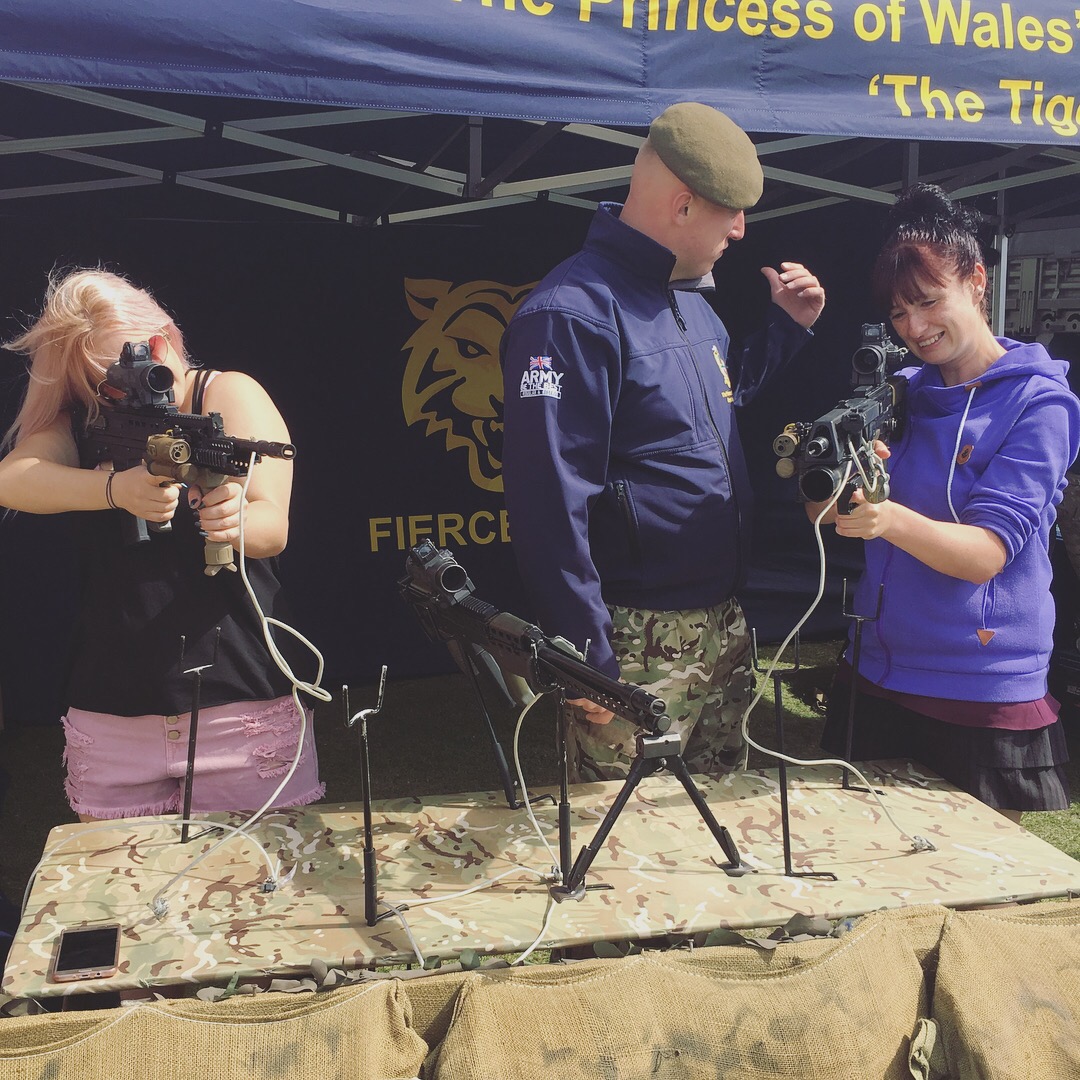 Last year, and this year too, I was waiting to see the Chinook. I can’t explain how exciting a giant helicopter is, but it’s probably linked to childhood and an out-of-the-ordinary hot summer’s day when I experienced one flying low over my home town. I remember the whomp-whomp sound it made as it literally shook the earth beneath my feet so clearly. Nothing. More. Awesome.

Except, last year the Chinook didn’t show. And we’ve spent the last year moaning about it like broken records. On Saturday, the Chinook also did not show. On Sunday, however, the airshow finally deserve a medal — the Chinook came (I will note here that I’m sure every time they didn’t show, it was probably because they were saving someone’s life or doing something ridiculously honourable somewhere else). Anyway, I’m not super technical on any of my aircraft knowledge, so all I can say is that a giant helicopter looks super cool when it does ridiculous manoeuvres in the air. We also queued to sit in the display Chinook like a bunch of five-year olds. We took selfies, and we tried on some uniforms and helmets.

The Breitling Wing Walkers were also pretty damn cool, and the Fireflies, who performed in the evening with fireworks spouting from their LED light lit bodies like Catherine Wheels of the sky. The Blades are also up there with my favs, along side the BAC Strikemaster and Team Raven. Actually there are so many unique and fascinating aircraft in the Eastbourne show, you really can’t say that anything isn’t cool, it’s just my personal preference that the bigger, louder, and faster they are, the better. The whole programme is worth your viewing attention.

When the planes weren’t flying, we were chatting to the support teams, and the Air Force and Army boys, or braving it out, rain, wind and sunshine, in our premium viewing spots and having the best time, cider in hand. Eastbourne is one of the friendliest and funnest places to be on this particular weekend of the year. 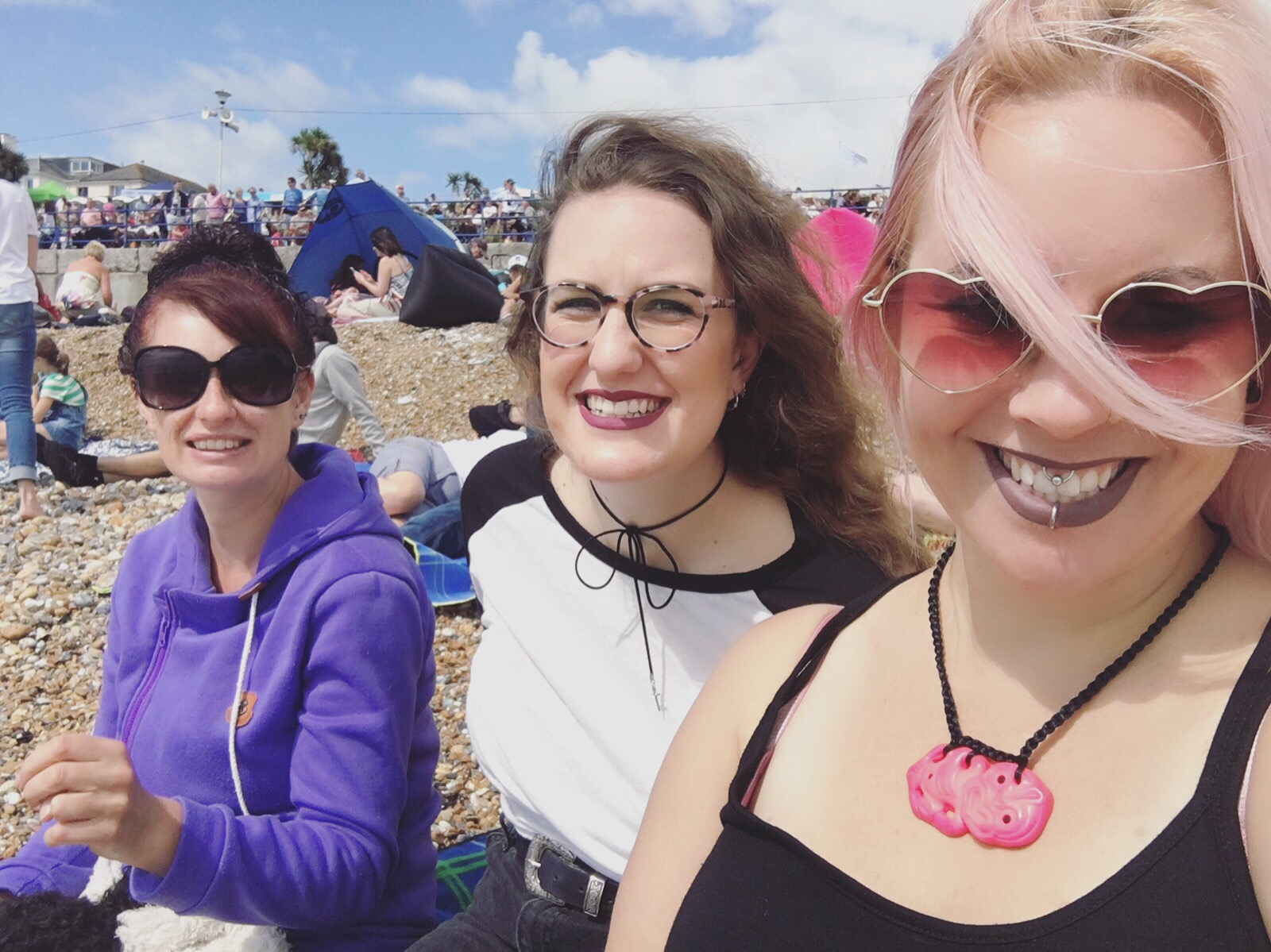 And now I’m on the train on my way home for work tomorrow. All I can say is I should have stayed and gotten a late train after 10pm so I could have seen the fireworks.

Because, obviously, I’m also a pyromaniac.