It always hurts to say goodbye. But the one thing I do know for Adisti, who gave me this theme for day eleven, is that the best thing about a farewell, is that it always opens a door to a new beginning.

Emmeline had found herself within a ruin. Here the wind had ceased to slice the air, save for the gentle breeze that was now tousling the snowflakes about in a flurry as they made their way down toward their final destination, the blanket of snow which smothered everything in sight.

She was surprised, but not shocked. Most cases in life, what we perceive is closely, if not completely, related to actual reality. Emmeline’s perception of reality had been turned on its head several times over within the last twenty-four hours, so a house that appeared manicured, ornate and solemn from the outside could very well on the inside be a grand and grave ruin, exposed to the elements and shrouded with heavy snowfall.

In the very least, it explained how cold it had been when she was walking up the driveway toward the front door.

“Where am I?” Emmeline asked.

She directed the question at the man who stood before her, though she doubted greatly how much of a man he was, after the disjointed conversations she’d had with her kidnapper on the nature of monsters.

He tapped his chin thoughtfully with long blackened fingers as he considered how to answer. His face was much like that of any man, with a nose, two eyes and a mouth. But to Emmeline he appeared similar to the vampires of folklore with graying flesh pulled tight over angular features, high cheek bones and strong eyebrows. His black hair, wiry and thick by nature was pulled back to the nape of his neck in a severe ponytail, revealing a defined widows peak and veins that pulsed blue and slow beneath his skin. He was taller than an average man, and his movements as he stepped through the snow toward Emmeline were elegant, seductive and smooth. Next to this creature, Emmeline did not even remember how she had managed to classify her kidnapper, Charon, as a monster.

Despite the horror of his individual features, the creature was not unattractive, and that understanding was what made Emmeline truly terrified of him.

As he paced closer through the snow, Emmeline took one step, two steps, and then a third backward, until she bumped into Charon as he came through the door. Charon steadied her from behind, and with one hand on each shoulder, he pushed her back towards the monster.

The creature smiled at the fear on Emmeline’s face, “Oh my, you are even more delicious than your mother! What a pity.”

His smile was so disarming that Emmeline almost didn’t hear the undertone in the words he used. He took her by the hand, and his grip was even colder than Charon’s. “So warm,” he whispered to her, as he led her deeper into the ruin, clearing the snow before them with a mere look.

Emmeline knew she should run. There was a cry within her, like her soul was caged and screaming for her to take action, but her body couldn’t hear it. She was warm, so warm. The snow was nothing really. It danced before her eyes and melted on her nose, each flake a playful sprite sent to enchant her.

And the man who led her, enthralling, enchanting and beautiful, he spun her around like a ballerina on the ice, a princess treasured and safe. He lifted her up off the ground and set her down on a giant stone that once belonging to a great gothic arch.

A glance over her shoulder once as she spun had brought Charon’s face to her attention. He was still standing just inside the door, which remained slightly open. The frown on his face and the set of his jaw told her she should worry.

But why? It was he who had kidnapped her! He was bad. He knew what had happened to her parents and her grandfather.

She turned to face the monster. On the pedestal she was at eye level with him, and she found herself peering into his burning red eyes with excitement as she asked, “Who are you?”

The monster smiled again, and leaned forward to stroke her throat right up to her chin with a charred finger. Then he spoke, “I have been called many things throughout the time I have spent in your world, my dearest. I was known as Hades once, and Anubis before that. Through many ages since then I’ve been called names like vampire, djin and yōkai. Sometimes the name they scream is Incubus. On nights when I’ve walked through the ice-bitten fields of destroyed crops I’ve heard them cry in anger at Jack Frost. At a distance I’ve heard them whisper Will-o-the-whisp, and my shadows on the snow have given birth to legends of glacial gods, the Yeti and Sasquatch among them. Once at a great massacre I was even mistaken for the Grim Reaper, death incarnate himself. Yet, sweet Emmeline, whilst I am the origin of some, if not all and many more of these myths, I am none of them.” He feigned a sigh, and shrugged, “What I am very simply, is a creature not of your world, and I have been trapped here for a very, very long time.”

Emmeline nodded in understanding. A few moments later she asked, “How did you come to be here?”

He laughed, “So many questions!” Then he looked up and over her shoulder at Charon, still standing near the door, “You new friend, Charon. He knows the answer to this. It was his dearly departed father who ferried me across the gap between worlds, millennia ago.”

“Don’t bring me into this.” Charon warned, taking steps forward from the doorway.

The monster put up a hand to signal for him not to come any closer, and Charon obeyed.

“Charon’s father?” Emmeline asked. Her mind was heavy and foggy, and she found herself struggling to separate her knowledge of Charon, the monster with a storm in his eyes who brought her here, and Kharon the family name her father had given her.

“Yes my dear, Erebus was a ferryman, a gatekeeper able to cross between your world and the otherworld freely. Back and forth, back and forth, as often as he liked, just like his son does,” he looked over his shoulder and glared at Charon.

“All those eons ago, Erebus and myself, we called each other friend, and he told me wonderful stories of a world that was not my own, and I wanted it. I wanted your world.” He smiled at Emmeline, “I paid the price for the crossing, knowing I would never go back. For thousands of years, through ancient Mesopotamia, Egypt, Sparta, Greece, and the power that was Rome, I was worshipped and adored, honored above kings and emperors.” His voice slowed as he continued, “Of course times changed, and at first I grew with them, my magic has always been strong in your world, see?” He held out his arms to the land within his mansion for her to understand, “But now my era is done, my time here has become a sentence and your world no more than a prison cell. I am ready to go home, ready to bid humanity a fond farewell,”

“What happened to Erebus?” Emmeline asked, her voice slurred and slow, “Why can’t he take you back home?”

The creature laughed, loud and harsh, “Because he betrayed me!” and now his eyes glowed with a hot fury, “I told him foolishly of my plans to return. Here in your world it would be impossible for me to find the right price to pay, so I created one of my own,” his smile grew wide.

“What price must you pay?” she asked in a whisper.

“Magical blood with enough power to ferry me no longer exists in your world, I have either outlived or destroyed them all,” he said, both pleased and disgusted with himself. “The changelings and creatures who serve me now have no real power, they couldn’t even bring you to me! I had to trick our dear Charon for that task to be completed.” He looked over her shoulder at Charon and smiled, then he turned his eyes back on her, “But you, my sweet, have just what I need,” he was chewing now on his fingers in excitement, his razor sharp teeth needling the grey flesh.

Emmeline knew she should run, but looking into his eyes, all she could manage to say was, “I, I think I should leave,”

“But you only just arrived,” he said, his tone kind and delightful.

“Emmeline!” A voice called to her, but the sound of it seemed so distant now.

She stood up on the pedestal and turned around. She was on a hill in the middle of nowhere. The mansion and its door were gone, and Charon was gone. It was just her and the monster in the snow.

“Your mother loved it here,” he said, seeing the fear on her face.

“My mother was here,” she said, her voice tormented. She backed away from him slowly, feeling for the back of the stone with her foot, intending to jump off and run. She could think a little clearer now he was no longer touching her.

She lost her footing on the stone, and tumbled back towards the snow. The monster was behind her, catching her before she knew it, and in his arms she felt safe as he cradled her. “Yes my love,” he cooed, “and as a result of that, I now have you! You, so precious and perfect, with blood so strong it can ferry me through the gate and back to the otherworld.”

“Me?” Emmeline froze in his arms.

He nodded, “Pure and sweet, the perfect vessel to carry a hybrid with magic blood almost strong enough to match my own,” he still smiled at her as he said finally, “Blood strong enough to pay for my journey home.”

“Emmeline!” Someone was looking for her.

She began to struggle in the monster’s arms, “You are not my father!” she cried at him, and tears of fury began to escape out of her eyes, rolling down her cheeks in a steady stream.

“Hush, hush,” he tried to soothe her, but refused to let her go, “I know Erebus – wait, I’m sorry, I mean Eric – he tried for a long time to keep you safe and hidden. He didn’t like what I did. His compassion for humanity was always a little unnecessary. But I found him and I made him pay. You don’t need a ferryman anymore when his son has learned how to row the boat now, do you?” he laughed at his own joke.

“You killed my father!” Emmeline hit him again and again but it made no difference, and her tears burned so hot they stung her own eyes.

He took both her hands in one fist, whilst still cradling her on his arm as he said, “No dear, I killed Charon’s father.”

She wouldn’t believe it. She couldn’t believe it. She, she had to believe it, because she knew it was the truth. This nameless monster was truly her father. Her tears got the better of her and she broke down into sobs. She reached up to wipe her face on her arm, and as she did so, her face touched the monster’s hand also. He let go of her hands very suddenly, and with a laugh put her down in the snow.

The moment her father let her go, Emmeline ran. 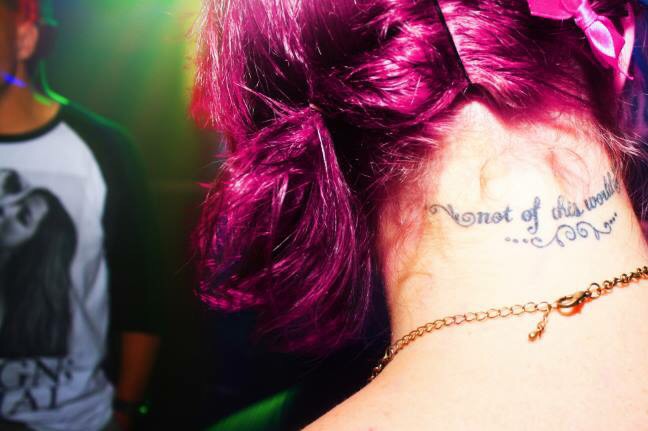